JC is an accomplished performer who  works locally, nationally, and internationally performing in a variety of bands and collaborations. Ranging from gypsy jazz, to raw blues, to vintage Hawaiian, hoedown, calypso and world music, JC is a master of many genres and styles.

JC is a very crafted and gifted songwriter. He writes songs that are full of flair, fire, and colour. Totally captivating, each has its own unique story to tell. His is an incredible talent.  Add to this a musicianship which is nothing short of formidable. He plays guitar, mandolin, harmonica, ukulele and Hawaiian Lap guitar with a passion and skill that will blow your mind.   In JC’s many different bands, he varies his sound to suit the genre and the occasion, and yet he never loses the polished professionalism which makes each of his bands both refreshingly authentic, and brimming full of raw energy, depending on what is required on the day!

JC has played at numerous festivals and venues, often sharing the bill with some of the greatest names in the folk, jazz, blues and pop world.

At the age of 10 J.C. was given his first guitar and on that day, armed with 3 chords, he wrote his first song, thus launching his song writing career! Within the year he was out performing. Local folk clubs, street busking, and variety shows kept him busy, until at age 13 he formed his first serious band, ‘J.C. & the D.A.s’ performing a mixture of 50s rock ‘n’ roll and originals. The following year J.C. took on his first paid summer residency playing instrumental music every Saturday night in local restaurant ‘The Galleon’.

At 15 local legend Dan Damage hauled him out of the high school arena onto the Island gigging circuit, with the punk band ‘Damage’ playing to audiences often 500 strong at the Island’s most popular venues.

A year later while ‘Damage’ was still going strong, J.C. along with fellow school mates, formed ‘The Chuff Train Stompers’ (later to become ‘The Chuff Train Hot Dogs’). This high energy, avant-garde skiffle/jug band toured the country for the next 4 years. They played numerous folk and blues festivals, and dozens of university student union bars and balls. J.C. became used to playing big stages alongside big names with ‘The Chuff Trains’ and consequently had to leave ‘Damage’ at 17.

As J.C.’s reputation grew, offers of work were constantly on the table, even playing his first ever country gig at Wembley Arena’s International Festival Of Country Music, ‘Best of British’, with the band ‘Sweet Water Valley’ in 1989.

With his experience of running bands J.C. felt confident, and realised the opportunities, of forming duos to fill another niche. Fellow Chuff Train member Jake Rodrigues and J.C. collaborated to form ‘Tapping Feet’. They combined a whacky blend of old time banjo, novelty Hawaiian, music hall and hot jazz, with their own material, and performed locally and nationally.

Following on from the duo with Jake, J.C. then formed his long standing duo with his sister, Angelina.   J.C. and Angelina have worked together as a successful duo act ever since, playing acoustic instruments and delivering a high energy, original show, largely self-penned. 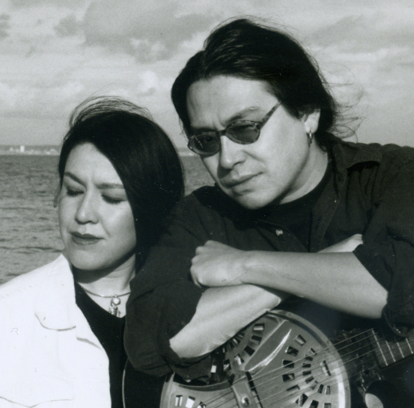 1994 saw the emergence of ‘The Dance Preachers’. Continuing in the spirit of The Chuff Trains, this  high energy, good time band, branched further afield into the world of Klezmer, Latin American, and Avant-garde Folk and Jazz. 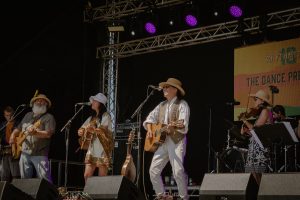 With squeezebox, bouzouki, fiddle, banjos and mandolins, this band has become the perfect vehicle to perform JCs more adventurous and ambitious material, as well as developing a more main stream set of good time and contemporary styles all delivered with a folk roots flavour full of fun and energy. The Dance Preachers continues to be a very popular and successful wedding and function band.

Alongside the duo and ‘The Dance Preachers’ J.C. continued to be involved in many other projects. Through J.C.’s passion for vintage National instruments he became good friends with such people as Bob Brozman, Roger Hubbard, Mark Makin, Stuart Cumberpatch, Michael Messer, Dave Peabody, Rick Stokes and many others. He spent some time with Bob Brozman in the States, and brought Bob’s show back to the I.O.W. on several occasions, for 4 fantastic blues extravaganzas that J.C. staged. J.C. also played in Michael Messer’s ‘National Breakdown Service’, an eight piece band predominantly using National instruments, headlining Bracknell festival and the Wirral guitar festival, and touring Switzerland and Italy over a two year period. 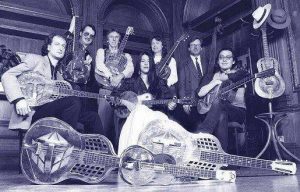 In 1995 J.C. teamed up with Midge Ure forming an acoustic trio to promote Midge’s latest acoustic based album ‘Breathe’. With Midge on guitar, J.C. on mandolins and slide, and old mate Jake Rodrigues on accordian, they toured together for the next 2 years. 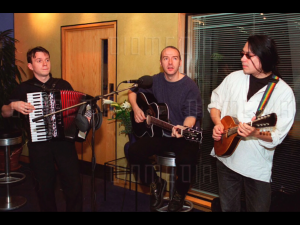 With Midge, JC and Jake performed around 120 shows in 20 countries, playing venues that ranged from art centres to huge stadiums, and billing alongside some of the biggest names in pop music. They played on countless T.V. shows in Britain and abroad, including a feature on the Russian 6 o’clock news to a viewing audience of 260 million!!

All 3 have enjoyed radio play in Britain and abroad, including a feature on radio 3’s Late Junction.

In 2004 J.C. joined Paul Armfield as one of ‘The Four Good Reasons’, recording Paul’s 1st album ‘Song Without Words’ at the prestigious Fallout Shelter basement studio of Island Records, London. 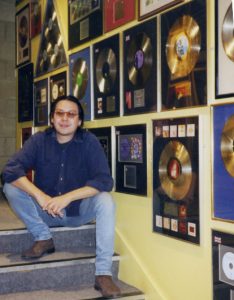 They have played,  many European dates, and home dates, including the acoustic stage at Glastonbury festival and the Borderline in London. J.C. also plays on Paul’s ‘Evermine’, ‘Blood Fish And Bone’, ‘Up Here’, ‘Tennyson’, ‘Found’ and ‘Domestic’ albums.

In the spring of 2006 J.C. formed ‘The Gramophone Party’ with Angelina, Jack Tate, Rupert Brown, Paul Armfield and later Richard White. The band was put together solely to perform at The Ventnor Jazz Festival, but after this one performance they were instantly booked for several other gigs including the main stage of Brecon Jazz Festival appearing later that summer, and more recently the main stage of Salisbury’s Larmer Tree Festival. 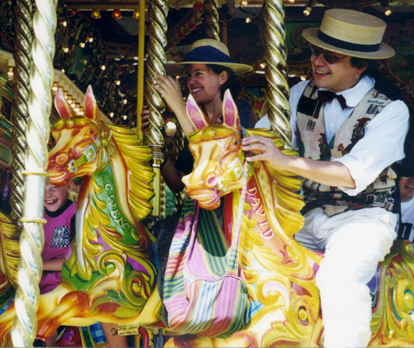 ‘The Gramophone Party’ brought out their C.D. ‘It Happened In June’ in time for Brecon. From 2010-2011 ‘The Gramophone Party’ as a trio teamed up with Jake Oldershaw’s Untied Artists performing a show charting the life and music of the crooner Al Bowlly, taking the band to more than 30 art centres and the Edinburgh Fringe Festival in 2011.

The Circle of Three

In 2008 J.C. teamed up with song writer Jan Kubon and pianist/composer Burkhard Schmidt to form ‘The Circle of 3’. This German-based trio perform solely their own compositions and have completed 6 very successful tours  included headlining spots at the Songtage Festivals in Germany and Luxembourg.

JC And The Supernumeraries

2012 saw the release of J.C.’s 4th solo album: ‘For What You Seek (You Will Find)’. His passion for his music, his instruments and his poetry shines through on every song. The supernumeraries came together to record, launch and promote this album and they continue to perform as a band with the focus totally being Jc’s own original songs.

JC joined Paul Armfield and Donal O’Riain in Tzigane and has been playing with this trio over the last 15 years. They specialize in European folk and traditional gypsy music, and go down a storm wherever they play!

Around 2016 JC teamed up with Gary Plumley to compose some original World Music using instruments such as Gary’s traditional flutes, saxophones and bass clarinet, and JC’s octave mandolin, Hawaiian and gypsy guitars. Joined by Jez Gray, Mark Chettle and Ken Black, they formed the Urban Nomads, and incorporating some of Mark’s great original material, they have performed regularly at Isle of Wight festivals over the last few years.

JC has been a long-term friend of the great British blues legend Dick Taylor since the early 90s. Around 2015 JC formed the Raw Blues Project with Angelina, Dick, and Rupert brown or Chris Jones on drums. They have been regularly performing ever since, both in the UK and further afield in Europe, occasionally joined by Phil May (lead singer of the Pretty Things) until his death in 2020.

Since he was introduced to the music of Django Reinhardt as a young teenager, JC has always had a passion for the music of Django and the gypsy swing movement. Along with fellow Django enthusiasts such as Hugo Boswell, Jez Gray, and Sol, JC formed the Django Café ensemble. Often joined by such players as Jon Thorn, Paul Armfield, David Hences, and Sim Jones,  they still gig today, with a lineup both fluid and always exciting. 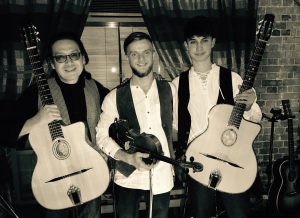 Again, since his teenage years, JC has developed a love of the early acoustic Hawaiian music from the 1920s and 30s. Over the years he has often depped with the great Martin Wheatly in The Hula Bluebirds, alongside fellow members Jake Rodrigues, and Dave Croft. Throughout his life he has introduced elements of the vintage Hawaiian hula sound into many of his bands. In 2017, having been asked to put on an evening of solely Hawaiian music, JC formed the Hula Hulagans. Tilly, Sol and Kathy make up this fun and authentic family ensemble, and have become a very popular art center and festival band.

The Rare Breeds Medicine Show came about as a result of an interest shared by JC, Kathy and Dave Godby in old Time Fiddle tunes and string band music. Established in 2021, JC saw that though this band he was able to get some of this more obscure and lesser heard music out to the public. It is fun to play, fun to listen to, and uplifting through and through.

2020 saw the formation of the Panama Picnic Orchestra.   JC and Sol had the idea of writing a set of original songs, and producing an album, in the style of Django, gypsy swing and the hot jazz era. Having always loved playing the classics, the standards, and the more obscure songs and tunes from this period of jazz, JC and Sol decided that they would put their songwriting skills to the test and produce this new album of originals “in the style of.” With Chris Jones and Jon Thorne adding their unique artistry, and also incorporating a flavour of mambo, Latin and world music, this latest project has blown away every audience it has so far played to, with performances  including the Isle Of Wight festival, Rhythm tree festival, The Isle Of Wight Jazz festival and Bournemouth’s Art By The Sea Summer Festival.

“J.C. Grimshaw is both a fine songwriter and instrumentalist. He is simply a delight to hear.”

“He has to be the best exponent of hula slide this side of the Atlantic.”

“His outstanding displays of virtuoso playing elicit a fantastic response from the audience.”